A woman’s weird ability to run and jump like a horse has shot her into internet fame.

A Norwegian woman named Ayla Kirstine appeared in a May 14 video that can be seen on Twitter. The video shows Kirstine walking along a dirt road on all fours, galloping around a field with a dog and gracefully jumping over a picnic table. It’s unsettling. 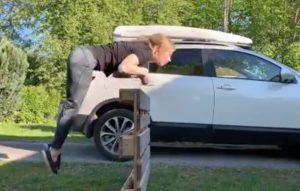 According to DeadSpin, Kirstine’s Instagram account shows off more of her jumping skills. She notes in one post caption that she is “so sensitive that I’m scared of everything,” but thanks people for kind comments.

And if you thought this was an isolated incident, you’d be wrong — Kirstine’s account has more than 10 videos of her demonstrating four-legged high jumping.
People running like horses have popped up occasionally in popular culture, and YouTube has plenty of videos of people showcasing their talent(?). There are even tutorial videos showcasing how to master the ability via Equestrian Maniac. 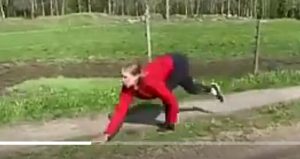 As weird as this looks, these people might be on to something. A 2016 study examined the difference between bipedal and quadrupedal running and found galloping humans were faster by a fraction of a second. If developed properly, athletes could theoretically smash records on all fours by the 2048 Olympic Games.

Saxon is a prolific writer with passion for the unusual. I believe the bizarre world is always exciting so keeping you up to date with such stories is my pleasure
Previous Drunk Man Vomits Hard, Throws Up Undiagnosed Tumor, Then Swallows It Back
Next Chinese Man Jailed 10 Days For Giving His Dogs ‘Illegal’ Names