Residents of Ogboko and its environs were shocked one morning to discover that a statue of Governor of Imo State, Rochas Okorocha, standing at the roundabout close to his village had suddenly turned white, looking like something from a strange horror movie. 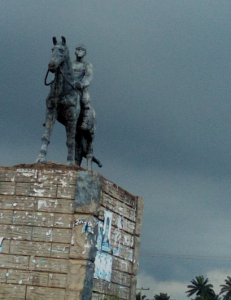 Governor Okorocha is alleged to be leaving office amidst jeers and complaints of non-performance from his kinsmen and many residents of Imo state, fueling rumours that some persons may have cursed the out-going governor, as a result of which the statue of him riding a horse suddenly turned white. 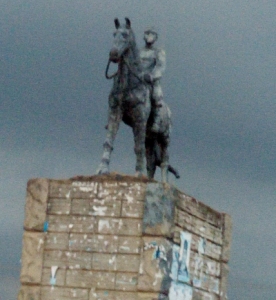 What do you think? Is this normal or is it a sign of strange things to follow the governor as he leaves office amidst complaints of gross non-performance by his kinsmen and Imo citizens? Or is it just a coincidence?

Saxon is a prolific writer with passion for the unusual. I believe the bizarre world is always exciting so keeping you up to date with such stories is my pleasure
Previous Intruder Breaks Into House, Cleans It And Leaves
Next Eiffel Tower Climber In Custody After Daring Ascent