Fugitive Promises To Surrender If His ‘Wanted’ Poster Gets 15,000 Facebook ‘Likes’

A wanted man had a bizarre negotiation with the police to turn himself in if the facebook post calling for his arrest received 15,000 views. He had earlier requested for 20,000 views but the police negotiated it down to 15,000. 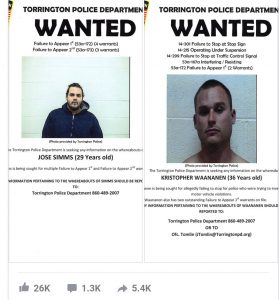 Jose Simms cut a deal with Connecticut’s City of Torrington Police Department to turn himself in if his “Wanted” poster on the department’s official Facebook account went viral and garnered 15,000 “likes.”
Simms, 29, is wanted on four warrants for first-degree failure to appear in court and three warrants second-degree failure to appear, reports Huffpost.

Simms initially made contact with Johnson over Facebook Messenger after the department began posting “Wanted” posters for various fugitives on its page.

He asked Johnson when his image would appear and suggested 20,000 “likes” in exchange for his surrender, but the officer negotiated him down.

Johnson said police had “exhausted other avenues” looking for Simms, and believed he was in New York. “So, when he reached out to us to post his ‘Wanted Poster’ we really had nothing to lose,” the lieutenant said.

“If he turns himself in we accomplish our goal, if the post got 10,000 views and someone provides us with information that leads to his arrest we accomplish our goal,” Johnson explained. “The ‘likes’ aspect was just a way to get it out there, we never thought it would become what it has.”
The post, above, passed the negotiated “likes” threshold Wednesday morning, and by early Thursday had secured more than 19,000.

Simms, however, had yet to submit himself for arrest.

“Some people think this is a game to us, or a publicity grab, it’s neither,” said Johnson. “We would have loved to have had someone provide us with an address within the first 15 minutes of the post, so we could have gone and placed him in custody, but that didn’t happen (as we all know now).”

Simms told police and “numerous news agencies” that he was “a man of his word” and would turn himself in, Johnson said.
“We hope that he will do the right thing and takes responsibility,” he added. “But as more time passes it doesn’t look like Mr. Simms will honor his agreement of turning himself in for 15,000 likes.”

Saxon is a prolific writer with passion for the unusual. I believe the bizarre world is always exciting so keeping you up to date with such stories is my pleasure
Previous Poster Shows Dead Man Begging People To Attend His Burial
Next Chinese Lover Buys Open Ocean Worth N35 Million For Girlfriend