In what looks like a love story seen in movies, Chinese man was slapped 52 times in public by his furious girlfriend for not buying her a new smartphone. The slaps could be described as hot slaps, so this was no child’s play and it is trending online. 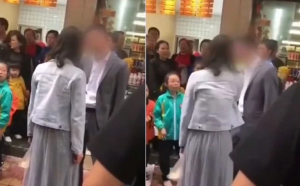 The Chinese man has been labeled a victim of abuse after being slapped in public a whopping 52 times by his girlfriend, who was apparently upset that he hadn’t bought her a new smartphone for Chinese Valentine’s Day.

Most Chinese couples celebrated May 20th, or “520” – one of the Asian country’s three yearly ‘lovers’ days’ – in a romantic way. But two lovebirds in Sichuan province decided to cause a shocking scene instead.

Videos captured by nearby surveillance cameras as well as passers-by and later shared on social media showed a young woman slapping her boyfriend in the street while viciously scolding him for allegedly failing to buy her a new smartphone as a gift. Although the footage doesn’t show all the slaps, police later confirmed that the man endured no less than 52 of them under the shocked gazes of strangers gathered to witness his humiliation.

What really surprised many of the millions of people who watched the disturbing videos doing the rounds online was the man’s calm attitude as he got slapped hard by his girlfriend. He barely flinches, let alone try to restrain her or retaliate in any way.

Alerted by the large crowd that slowly gathered around the couple, police arrived on the scene and tried to calm things down. They later confirmed that the man had indeed been slapped a total of 52 times – a bizarre way to celebrate 520 – and added that even after the public humiliation, the victim actually tried to protect his abusive girlfriend.

When police officers tried to take the two “love birds” away, the man tried to protect his girlfriend as she continued to slap him, saying that he had made a mistake by not buying her the gift she wanted and that allowing her to slap him was the only way to calm her down. He later told police that his girlfriend had been paying most of his expenses, so that sort of explains his willingness to accept being slapped around so much.

The couple refused to settle their dispute at the police station, but eventually calmed down and vowed to solve their problems in a more civilized manner in the future.

Tags Man Slapped by girlfriend for not buying her phone

Vanko is a cheerful writer whose enthusiasm for unusual stories is inspiring.
Previous Chinese Lover Buys Open Ocean Worth N35 Million For Girlfriend
Next Millionaire Uses Giant Billboards To Search For Woman To Marry, Over 1000 Women Apply Within 10 Days