Millionaire Uses Giant Billboards To Search For Woman To Marry, Over 1000 Women Apply Within 10 Days

A mysterious millionaire is using a weird means to look for the ‘love of his life’.

If you don’t know yet and you’re interested in getting a millionaire as a husband, there are billboards advertising the “LDS Millionaire” looking for his wife. The billboards went up 25 days ago and now they’re not only getting national attention, but also attention from a lot of women. Within the first 10 days, over 1000 women applied to get married to the man. 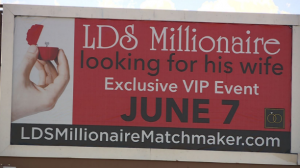 “We have ten billboards across I-15 from Utah County to North Salt Lake,” said Amy Steven Seal.  “And it’s working.”

Seal is a matchmaker. Her company, The LDS Matchmaker, is the mastermind behind the ads.

So far, they’ve received nearly a thousand applications from women all around the world and there’s still two weeks to go.

“Everyone wants to find love, so why not?” said Emily Tracy, an applicant. “Maybe give it a shot.”

eal said she’s keeping the “millionaire’s” identity a secret but she did let a few things slip.

“He really wants kids. He’s never been married, has no children,” said Seal. “And he’s very committed to making that happen in whatever creative way that needs to happen.”

When we joked about what was wrong with him, Seal laughed and said “Well I think you could ask any single person what’s wrong with you? Why aren’t you married yet? There’s no deal breakers wrong with him.”

“He’s very busy. He does have time for a relationship but he doesn’t have a lot of time to find dates,” Seal said.

If you check out the online application there are pretty standard dating questions like “what is your body type” and “what are your hobbies or interests?”

But there are also questions like “what Ward/Stake are you in” and “are you currently a worthy temple recommend holder?”

“As a matchmaker and dating coach I’m always going to recommend the closer you can come to the same values the better,” said Seal. “But it’s not a deal breaker for him (if the woman is not LDS).”

And as far as the money goes, it typically can’t buy love, but maybe in this case it will.

“He isn’t looking for a gold digger,” said Seal. “He certainly wants to provide safety and security for a woman and I think that checks a lot of boxes for women and that’s why we decided to put it out there.”

“The money is nice, sure, but it’s not everything to me,” said Childress. “That’s not what a relationship is.”

Seal’s company is accepting applications through May 31.  She says from there they will narrow down the candidates through video interviews and will ultimately choose 20 women to attend a private dinner event on June 7.

“It’s definitely grown beyond our hopes and expectations,” said Seal. “I think he’s going to find his wife.”

Vanko is a cheerful writer whose enthusiasm for unusual stories is inspiring.
Previous Man Slapped 52 Times In Public By Furious Girlfriend For Not Buying Her New Smartphone (watch Unbelievable Video)
Next Woman’s Head Gets Stuck In Neighbour’s Metal Grate For Five Hours