A US farmer says he had “no other choice” but to cut off his own mangled leg with a pocket knife after it became trapped in farm machinery.

Nebraskan man Kurt Kaser, 63, was unloading corn last month when he accidentally stepped on the opening of his grain auger and his leg was sucked inside. 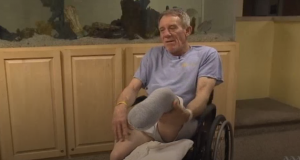 He said he had removed part of the safety screen covering the hopper to make it fit under a bin after the ground on his farm had frozen in the winter.

“I’m kind of disappointed in myself that I didn’t think of fixing that thing, or whatever. But that’s why they call it accidents I guess,” he told America’s ABC News.

On April 26, he was filling that auger with grain, forgetting he had removed the screen.

Mr Kaser said he could not free his leg, he was alone and he didn’t have his mobile phone. 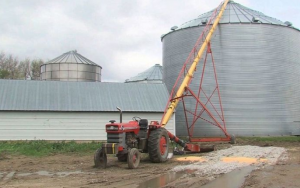 “And then when my foot was in there banging around, I was trying to hold my leg, pulling it out, and I said, ‘This is not good.’

“I don’t know if I had [my mobile phone] with me, if it fell in the auger and went in the bin. I don’t know. But nobody has been able to find it.”

The auger — which looks like a giant drill bit and ferries grain from the ground to a bin — kept pulling on his leg, tearing away skin, tissue and muscle until he could see bone protruding through the lower portion of his leg.

So he took out his pocket knife and sawed off his leg below the knee.

“I felt it try to grab me again. I about gave up and said ‘whatever happens happens. If it sucks me in all the way, it’s over with,'” he said.

Mr Kaser said he nearly dropped the knife in the auger, but once he had a good grip, he started sawing off his leg.

He said he doesn’t remember experiencing much pain.

“Adrenaline kicked in so much that I don’t know if it hurt or not.”

He then crawled 45 metres to a phone and was flown to a hospital. He never lost consciousness.

Mr Kaser will get a prosthetic limb once his leg has fully healed.

Saxon is a prolific writer with passion for the unusual. I believe the bizarre world is always exciting so keeping you up to date with such stories is my pleasure
Previous 52-Year-Old Brazilian Bodybuilder Uses Oil Injections to Boost His Muscles to Ridiculous Proportions (Watch Video)
Next See Mugabe’s Dressing That Is Currently Breaking The Internet