A Colombian woman who allegedly wanted to check if her neighbor was home ended up getting her head stuck in the front door metal grate for five hours.

Photos of an unnamed woman from the town of La Virginia, in Colombia, recently went viral on social media after it was reported that she had to be rescued after spending five hours with her head stuck in a neighbor’s front door metal grate. It’s not clear if the woman intended to spy on her neighbor, or if she merely stuck her head through the grate to see if there was anyone home, but one thing’s for sure – when she tried to pull her head back through the grate, she realized she wasn’t going anywhere. 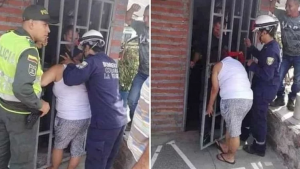 Fortunately for her, someone heard her cries for help and called the police. They couldn’t pry her head from the gate, though, so they called the fire department for assistance. It still took five hours to release the woman from the metal trap she put herself in.

Photos of smiling policemen and firemen working to free the woman have been doing the rounds on Latino social media since May 19, when the story was first reported by Radio La Roca FM.

Saxon is a prolific writer with passion for the unusual. I believe the bizarre world is always exciting so keeping you up to date with such stories is my pleasure
Previous Millionaire Uses Giant Billboards To Search For Woman To Marry, Over 1000 Women Apply Within 10 Days
Next 52-Year-Old Brazilian Bodybuilder Uses Oil Injections to Boost His Muscles to Ridiculous Proportions (Watch Video)