An Indian man has become popular for going on hunger strike in front of his girlfriend’s house to insist that she cancelled an upcoming wedding arranged for her with another man.

The boy named Ananta Burman from India’s West Bengal region was in a relationship with a girl named Lipika for the last eight years. 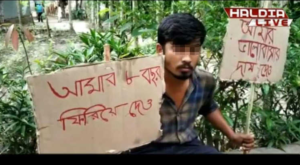 Reports have it that Lipika stopped communicating with Ananta unexpectedly, and blocked him from WhatsApp, phone and other social media sites.  Ananta did some digging and found out that Lipika’s family was looking to get her married somewhere else. Without wasting time, Ananta thought of an idea to get back his love. Ananta started a dharna outside her home just when the prospective groom was about to visit Lipika’s home.

He had a placard with him that read ‘Give back my eight years’. Some people even came out in support of Ananta. At the same time, the family of the guy also arrived at the spot and not just the family members, police also arrived at the location. But as they say, if you are in love you tend to cross boundaries and even the police couldn’t stop Ananta from breaking his fast, or moving from his place of hunger strike or dharna. 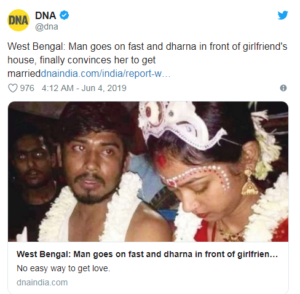 As the went time on, Ananta’s health got worst and he was rushed to the hospital. Looking at all of this, Lipika finally agreed to get married to Ananta and after intervention from locals, her family also came around and agreed for the marriage proposal.

Ananta and Lipika got married almost immediately and went to a local mandir to complete all rituals. The phrase – Pyar Kiya To Dharna Kya!, has been proved here.

Tags Man on hunger strike to get back girlfriend

Saxon is a prolific writer with passion for the unusual. I believe the bizarre world is always exciting so keeping you up to date with such stories is my pleasure
Previous Lack Of Sleep Shrinks Men’s Testicles, Expert Says (Watch Video)
Next Woman Breaks Record After Travelling To Every Country In The World