A bank robber in Israel allegedly burglarized two banks last month by threatening bank tellers with an avocado he claimed was a grenade.

The thief, identified as a 47-year-old man, stole almost $8,400 from two banks in Beersheba with his avocado, which he painted black, and a misspelled handwritten note demanding money from the bank teller. 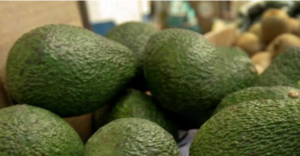 The robber was holding the edible “grenade” and got away with nearly $4,500.

Less than a week later, the man pulled the same stunt using the imposter grenade at another bank, and successfully stole more than $3,300, the news outlet reported.

Investigators were able to track the man’s cell phone, and identified him as a former convict who previously served three years for robbery.

Saxon is a prolific writer with passion for the unusual. I believe the bizarre world is always exciting so keeping you up to date with such stories is my pleasure
Previous Woman Gets Stuck in Children’s Toy Car, Cut Free With Bread Knife (Watch Hilarious Video)
Next Restaurant Chains Customer To Seat To Make Sure He Doesn’t Leave Without Paying