(CNN) – A bronze bowl that was being used by a family to store tennis balls has sold for $4.9 million (4.8 million Swiss francs).

Experts from Swiss auctioneers Koller Auctions were valuing items at the family home when they spotted the bowl, a parcel-gilt bronze incense burner with phoenix heads for handles. 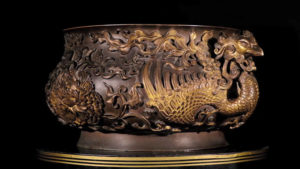 “When they saw the bowl, they were amazed. They’d never seen anything quite like it,” Karl Green, head of media relations and marketing for Koller Auctions, told CNN.

The bowl, believed to be from the late 17th century, had belonged to the Swiss family for years after being brought to Europe from after a trip to China. According to Green, the family offered the bowl to a museum in Berlin, but the museum had no interest in the piece.

A British auction house also declined the item after seeing photos of it, assuming it to be 19th century.

“After all that, (the family) thought it wasn’t worth a lot, but they liked it. They displayed it. As you do with a bowl in your house, they put things in it, and they put tennis balls in it,” Green said.

However, after being acquired by Koller Auctions, the incense burner caused a sensation when it was exhibited at an antiques fair in Hong Kong. It caused “intense telephone” and saleroom bidding at auction, with 30 bidders vying to get their hands on the piece.

“(Koller Auctions’ experts) think because of the peonies and the phoenix decoration and because of the quality, it was probably made for Chinese emperors,” Green added.

“When you compare to other incense burners or other bronze objects of this size and date, it went far above what anything else has made, worldwide.”

Saxon is a prolific writer with passion for the unusual. I believe the bizarre world is always exciting so keeping you up to date with such stories is my pleasure
Previous Norwegian Island To Become World’s First Time-Free Zone, You Need To See Why
Next Man Jailed for Carrying Out Bank Robbery Armed with a Banana