A family in India has gone viral for deciding not to cut down an age-long tree but instead built their house around it.

When the Kesharwani family in Jabalpur, India, decided to expand their home back in 1994, they pondered what to do about the giant fig tree growing in their garden. Rather than cut it down, they decided to build a four-storey house around it. 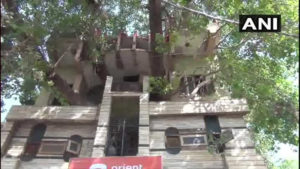 Today, the Kesharwanis’ residence is one of the most stunning sights in Jabalpur – a concrete villa with a giant tree trunk growing through its multiple stories and thick branches coming out through the windows, walls and roof. Yogesh Kesharwani, whose parents built the house 25 years ago, said that the fig tree is about 150 years old but still blossoms into leaves and fruits every year. Even though they have to navigate around its thick trunk when moving through the house, the Kesharwanis have gotten used to it and even grown to consider it a member of the family. 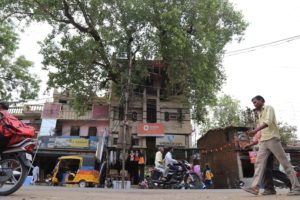 “We are nature lovers and my father insisted that we keep the tree,” Yogesh Kesharwani told AFP. We knew it was easy to cut the tree but difficult to grow one like it.”

Known as “peepal” in Hindi, the fig tree is considered sacred in India, and cutting one down is considered by many to be sacrilegious. It’s mentioned in the Geeta, a Hindu religious text, and Hindus believe that 350 million gods and goddesses reside in one peepal tree. 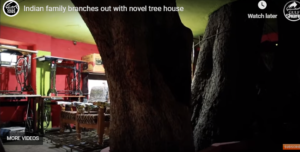 The Kesharwani family claim that apart from keeping the house cool, the giant tree growing through their home is also practical to have from a religious standpoint. Yogesh’s wife doesn’t have to go to the temple to pray, she can just do it in front of the tree every morning.

Yogesh recalls that soon after the house was completed, local engineering and architecture students started to come by to see how it was built. Today, his home is one of the main attractions of Jabalpur.

“We don’t even realize that the tree exists because it doesn’t come in our way. It just stands there silently,” Yogesh said.

Saxon is a prolific writer with passion for the unusual. I believe the bizarre world is always exciting so keeping you up to date with such stories is my pleasure
Previous Court Orders Man To Pay Ex-Wife N62 Million For 27 Years Of House Chores
Next Norwegian Island To Become World’s First Time-Free Zone, You Need To See Why