An elderly couple in the UK claimed that they were held hostage by a pair of seagulls nesting on the roof of their Lancashire home. Every time they tried to leave the birds would become aggressive and attack them.

Roy and Brenda Pickard’s story sounds like a real life version of Alfred Hitchcock’s “Birds”. The elderly couple were held hostage in their own home by a pair of adult Herring Gulls after the birds’  chicks slipped on the roof of the house and landed onto the canopy directly above the front door. Every time Roy tried opening the front door, he was confronted by two angry squawking adult seagulls. One time, when he decided to take his chances and go outside, the 71-year-old was hit so hard on the back of the head that he had to be taken to the hospital for help. Local authorities have installed a gazebo outside the couple’s home, which should offer some protection, but that’s the best they can do for now. 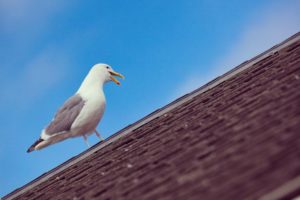 “The whole thing has been terrible,” Roy Prickard told reporters. “I’ve not been able to go out of the front door. If I try to get out of the door, the two adult birds are right there and I’ve got no chance. It’s genuinely frightening. My wife isn’t well or very mobile at the moment so we’re relying on me to get out.”

Luckily, the Prickard’s garage is connected to their house and he can get out through there when he needs to do some shopping, but he doesn’t dare get out of the car to close the garage door, so he always leaves it open until he comes back.

Roy has complained about the situation both to the local authorities and animal organizations like the RSPCA and RSPB, but their solutions have been less than ideal. The Wyer Council says that Herring Gulls are protected while nesting, so all they can do is try to make the couple’s life bearable by installing a gazebo and making arrangements so that 77-year-old Brenda can reach her private appointments safely.

Saxon is a prolific writer with passion for the unusual. I believe the bizarre world is always exciting so keeping you up to date with such stories is my pleasure
Previous Parents Name Son “Google” Hoping It Will Make Him Great In Life
Next See Plant That Has Flowers Shaped Like Hummingbirds