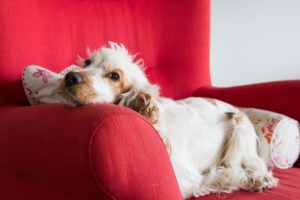 This dog has gone viral just for having a strange condition.

Peter, a one-year-old cocker spaniel from Sheffield, in the UK, has earned the nickname “Fainting Pete” due to his bizarre habit of suddenly stiffening and falling over whenever he gets to excited or nervous.

Peter’s owners, Emma Clayton and Oliver Broomhead, adopted him from a family who could no longer look take care of him. They were told that the adorable pooch had been “fainting” ever since he learned how to walk, and despite seeing several veterinarians about his bizarre behavior, no one has been able to figure out what’s causing it. The English couple said that it occurs every time Peter sees ducks, enjoys his walks a bit too much or gets scared. Sometime he’ll just freeze and fall over for no apparent reason which lead doctors to believe that he is suffering from a rare neurological condition, although no one can say for sure.

“When he gets excited or scared, sometimes for no reason at all, he just freezes up and topples over,” Emma Clayton told Storytrender. “It depends on how overwhelmed he is, I guess – sometimes his body will freeze for almost 30 seconds. As far as we know he is not in any pain – he is conscious when it happens, his eyes are open, he can follow me with his eyes, he just can’t move his body.” Peter’s owners said that people’s reactions to his sudden “fainting” ranges from horrified to amused, but they always assure anyone showing concern that he is not having a seizure and that he is not in any real danger. It’s never fun when it happens, but Emma and Oliver have gotten used to it.

“We are so used to it now, we think it’s slightly comical so when they see us react they know it’s ok- we do have to explain it quite a lot but once we do everyone just wants to love him,” Emma said.

The triggers for Peter’s “fainting goat syndrome” are many, from birds and other dogs, to changes of ground texture, such as from grass to gravel. Episodes last from a few seconds to a bout a minute and can occur several time a day.

Peter’s owners have been passed down from specialist to specialist, because no one has been able to diagnose him. Some have suggested that the fainting could be caused by cataplexy or narcolepsy, and one vet thinks it may be linked to episodic muscular hypertonicity. However, he will need specialized testing in Germany to confirm the cause. His owners have started a crowdfunding campaign to pay for the medical bills required to properly diagnose him.

In the meantime, you can find Peter on Instagram, where he goes under his nickname, Petrified Pete.

Saxon is a prolific writer with passion for the unusual. I believe the bizarre world is always exciting so keeping you up to date with such stories is my pleasure
Previous Sword Swallower Attempts To Swallow Blade Curved 120 Degrees (Watch Video)
Next Parents Name Son “Google” Hoping It Will Make Him Great In Life