In the high-pressure atmosphere of a competitive game, even the best player can miss.

Ted St. Martin is the record-holder for the most consecutive free throw baskets by a human being. He threw an amazing 5,221 consecutive Free Throws in a demonstration session back in 1996. 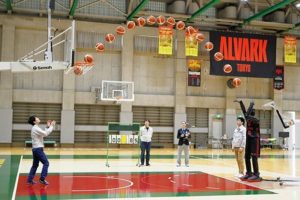 But the record for a robot, until this year, stood at a deeply unimpressive five.

Now CUE3, a basketball-playing robot created by a team of Toyota engineers, has smashed the robotic record and has his mechanical eyes trained on Ted St. Martin’s daunting total.

What began as a spare-time project for the group has proved a remarkable success in demonstrating the potential of robotics and artificial intelligence.

A machine with unerring sporting accuracy may seem like a novelty, but the same spirit of technical innovation is already being applied by Toyota to create support robots that can help injured and disabled people in their rehabilitation and with day-to-day tasks in the home.

CUE3 has all the presence of a human sports star, standing a mighty six feet 10 inches tall and wearing a number 93 vest. 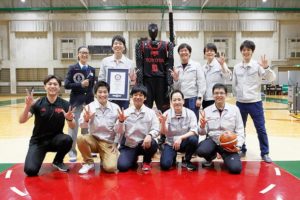 A film of CUE3 landing a shot from the centre line quickly spread around the world on social media and the enthusiastic public response helped prompt a bid to set a Guinness World Record for the most consecutive basketball free throws by a humanoid robot.

Earlier versions of the robot had proved unsuitable for the feat, as it took up to three minutes to reset the machine after each shot, but in five months’ development work, CUE3 made the record bid a realistic prospect when it took to the court again in May this year.

The team were committed to going far beyond the series of five successful shots required to set the record, but could not be sure what effect the stress of repeated shots might have on their robot.

Other factors, such as the air pressure in the ball and the true angle of the hoop had to be taken into account. The process of retrieving the ball and placing it accurately in the robot’s hand also had to be smooth and accurate every time, as any interruption in the sequ The CUE3 duly landed the first five shots, ensuring a new record would be set, then progressed to 200, which matched the number achieved in a rehearsal session. More than three hours later, the score was 1,000 perfectly scored baskets, at a rate of one every 12 seconds.

Eventually the team’s ambition was reached with 2,020 shots – the number matching the date of the Tokyo Olympics and Paralympics – accomplished in six hours 35 minutes.ence would bring the attempt to an immediate halt.

Saxon is a prolific writer with passion for the unusual. I believe the bizarre world is always exciting so keeping you up to date with such stories is my pleasure
Previous ‘Death Awareness Cafe’ puts customers in coffins after cup of tea to reflect on life (video)
Next House abandoned by terrified owners after ‘children’s screams’ heard in basement