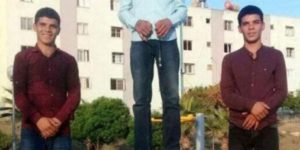 A 19-year-old convicted killer in Turkey managed to escape from prison by allegedly switching places with his twin brother when he came to visit him.

Murat A. was serving a long prison sentence for murder at the E Tipi Kapası Prison in Mersin, southern Turkey when his twin brother, Huseyin, came to visit him last Thursday. They were apparently allowed to meet face to face and they used this opportunity to swap places. A photo of the two shows that they are not exactly identical, but it turns out they looked enough alike to trick prison guards into allowing Murat to just walk out of the detention facility. It’s not yet clear why the inmate’s brother agreed to take his place in a maximum security prison, but an investigation is ongoing.

Although E Tipi Kapası reportedly does not have a facial recognition system able to detect the subtle differences between people’s faces, the guards quickly realized there was something off about the teen criminal they had grown to know in the year he had already spent there. They alerted the local police about the changes they had noticed in Murat after his brother’s visit, and a search warrant for the inmate’s home was swiftly issued. When police entered Huseyin’s home, they found Murat A., and brought him back to the prison he had walked out of.

Both twins are now behind bars while police try to figure out the reasons behind the switch and how they pulled it off without raising the alarm.

Saxon is a prolific writer with passion for the unusual. I believe the bizarre world is always exciting so keeping you up to date with such stories is my pleasure
Previous Dr. Finds Tiny Lizard In Patient’s Ear
Next Indian politician announces £1,000 rewards for anyone who kills sex attackers after two sisters were gang-raped by seven youths