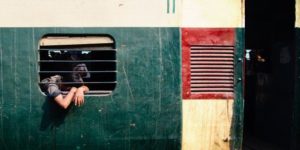 A man snored so loudly inside a train compartment that other passengers made him stay up as punishment so that they could get some sleep, according to media reports.

The passenger, identified only by his first name, Ramchandra, however, took the whole thing in his stride and decided not to lodge a complaint against his fellow travellers for forcing him to stay up for five to six hours on the LTT-Darbhanga Pawan Express, Telegraph reported.

“I sought to know whether the passenger (Ramchandra) wanted to lodge a complaint if he felt victimised or offended but he replied in the negative,” said Ganesh Virha, the chief ticket inspector of the Jabalpur division of West Central Railway. The incident took place last week.

“The train was a bit late and when I entered the coach, passengers briefed me about the heated argument that took place during the night journey. Ramchandra initially resisted the idea but later agreed to their proposal. In such cases, we take the help of the RPF or the GRP, but thankfully here the matter as sorted out amicably,” Virha told the news agency Press Trust of India.

It seems that the spot justice meted out by passengers didn’t rile Ramchandra who ended up making friends with most of the passengers.

Vanko is a cheerful writer whose enthusiasm for unusual stories is inspiring.
Previous How An Entire Village In India Came Together To Stop A Couple From Conceiving Their 18th Child
Next Man Buys Sex Doll ‘To Remind Him of His Lost Son’