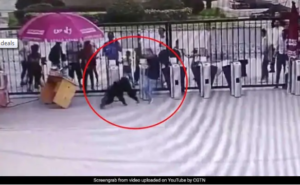 A chimpanzee escaped from his enclsoure in China’s Hefei Wildlife Park on Friday morning, causing much confusion and chaos as he charged at visitors and even kicked an employee to the ground. The 12-year-old male chimp, named Yang Yang, was spotted running on the roof and evading capture for some time before he was shot with a transquiliser dart and returned to his cage.

According to Daily Mail, the chimpanzee made his “prison break” by climbing up a fallen bamboo tree.

Police were called to the scene and visitors to the wildlife park evacuated – but not before the chimp bolted towards some of the curious onlookers. A video going viral online has captured the incident, and it also shows the chimp kicking a zoo keeper to the ground.

After failing to persuade Yang Yang to return to his enclosure, authorities fired a tranquiliser dart at it. A video shared by Hefei Police shows the chimp climbing onto the roof before falling asleep. He was then transferred back to his enclosure.

Nobody, including the zoo keeper, was injured in the incident, authorities say.

In 2016, a chimpanzee escaped from a zoo in Japan and evaded capture for some time by climbing a pole.

Saxon is a prolific writer with passion for the unusual. I believe the bizarre world is always exciting so keeping you up to date with such stories is my pleasure
Previous Woman Sees Something Large Underwater – Human-Sized Jellyfish (Watch Video)
Next Video: Police Officer Saves Choking Baby After Pulling Over Speeding Car