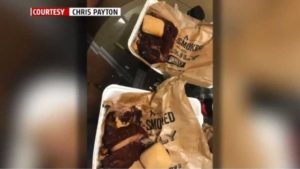 A man in Pennsylvania is accusing his delivery driver of speeding off with a bellyful of barbecue.

Chris Payton, of York County, claims he ordered six ribs from a local barbecue restaurant via DoorDash, only to discover that the driver had helped herself to two of the ribs, and some waffle fries, before dropping them off.

“I guess she just pulls over to the side of the road and just decides to have herself a little snack before she delivers,” Payton told Fox 43.

Payton had also taken photos of his incomplete order, noting that the two ribs appeared to be “torn off” from the rest of the meat. Fox 43 reported that bite marks appeared to be left behind, too.

Surprisingly, the eatery that provided the ribs — Dickey’s Barbecue, located in West Manchester Township — told Fox 43 that this wasn’t the first time they fielded complaints about that very DoorDash driver, or “Dasher.”

DoorDash has since confirmed to Fox News that the offending “Dasher” is no longer working with DoorDash.

“We sincerely regret that this incident fell short of the experience we strive to give our customers every day,” a DoorDash spokesperson confirmed. “We reached out to this customer immediately after being notified of this event. We have since taken appropriate actions, including deactivating the Dasher from our platform for failing to follow and maintain our standards of food safety.”

The company reportedly issued Payton a refund, but he’s also hoping the driver learned a lesson in treating customers with respect.

News of the alleged barbecue bandit follows a similar complaint lodged against a DoorDash delivery driver earlier this year. In March, a customer in Stockton, Calif., claimed his “Dasher” took a sip of his milkshake before dropping it off, although he didn’t discover the driver’s dirty deed until later, when he watched his family’s front-door surveillance footage.

DoorDash, which was founded in 2013, pays the Dashers that act as independent delivery drivers for restaurants in their area. Restaurants can apply to appear on the DoorDash app and website to be included among a specific area’s delivery offerings.

Saxon is a prolific writer with passion for the unusual. I believe the bizarre world is always exciting so keeping you up to date with such stories is my pleasure
Previous Houston Man Hooks Up Fish Only To Discover Huge Snake Coiled Around It (Watch Video)
Next Doctors remove 33 objects including razor blades and a screwdriver from the stomach of a 30-year-old man