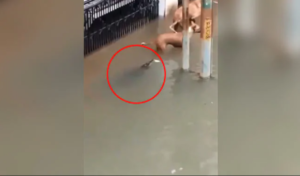 Amidst heavy rainfall that triggered flash floods in Vadodara, Gujarat, in India, a scary video of a crocodile attacking a dog on a water-logged street has gone viral. The video, which has been doing the rounds of social media and messaging platforms since Thursday, shows a crocodile swimming on flooded street. In the short clip, it sneaks up behind a dog on the street and tries to attack it – unsuccessfully.

The crocodile was approximately 3.5-foot-long. After being captured by Wildlife Rescue Trust, it was handed over to the forest department.

Mr Pawar told NDTV that the crocodile had probably entered the society after a taalab or pool behind the area, connected to Vishwamitri River, overflowed due to heavy rains. The river, which flows through the city, is home to a number of crocodiles.

Mr Pawar confirmed to NDTV that rescue operations to catch the other crocodiles are on in the city.

What do you think of the video? Let us know using the comments section.

Saxon is a prolific writer with passion for the unusual. I believe the bizarre world is always exciting so keeping you up to date with such stories is my pleasure
Previous See Town of 800 People That Gets 1 Million Tourists a Year
Next Man set to marry himself on August 11, invites friends to his “holy sologamy”