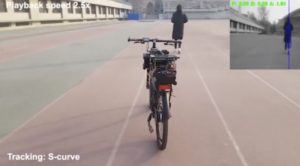 While tech giants like Tesla and Google are working hard to perfect autonomous cars, a team of scientists in China is developing a self-driving bicycle and their results are pretty impressive.

Showcased in a short video presentation, the autonomous bicycle developed by scientists at Tsinghua University, in Beijing, can balance itself while also avoiding obstacles, following certain trajectories and obeying vocal commands. It can do all these things thanks to a revolutionary type of computer chip that combines two different architectural approaches to computing that hadn’t really worked well together until now, due to communication difficulties between the two systems. However, if this self-driving bike is any indication, the Chinese seem to have solved those issues.

This autonomous bicycle is not the first of its kind – A US University has a similar project underway – but the computer chip powering it certainly is. It combines computer science-based machine learning and human brain-inspired networks, allowing it to perform several actions independently at the same time. Because the new chip, called Tianjic, allows for easy communication between its network, it can balance the bicycle, while also avoiding obstacles in its path and follow a number of verbal commands.

“Using just one chip, we can demonstrate the simultaneous processing of versatile algorithms and models in an unmanned bicycle system, realizing real-time object detection, tracking, voice control, obstacle avoidance and balance control,” Chinese scientists from the Center for Brain Inspired Computing Research at Tsinghua University wrote in a paper. “Our study is expected to stimulate AGI development by paving the way for more generalized hardware platforms.”

While claims of accelerated Artificial General Intelligence (AGI) – a term used to describe artificial intelligence on a par with human intelligence – are too bold to be taken seriously, the new Tianjic chip is proof of the strides Chinese scientists have made in the field of artificial intelligence. They may not yet have the most advanced AI chips in the world, but if their latest achievements – like those eerie AI news anchors – are any indication, they are getting there and fast.

Saxon is a prolific writer with passion for the unusual. I believe the bizarre world is always exciting so keeping you up to date with such stories is my pleasure
Previous Male Basketball Star Banned After Urine Test Showed He was Pregnant! You Won’t Believe What Happened
Next This Rich man is willing to pay N6 Million to any man who can seduce his fiancé, wants to know if she truly loves him