Male Basketball Star Banned After Urine Test Showed He was Pregnant! You Won’t Believe What Happened 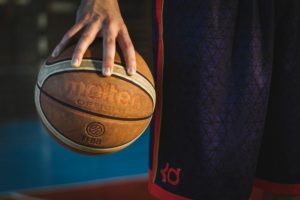 American basketball player Donell “D.J.” Cooper has been banned from the sport for two years after a urine test found him to be pregnant.
Reports have it that the urine sample was for a drug test which Cooper suspected he wasn’t going to pass so he possibly requested his girlfriend to give him urine to submit as his own, not knowing she was pregnant.
The 28-year-old point guard who last played for AS Monaco, in Europe, was suspended for two years by the International Basketball Federation (FIBA) after a urine sample was found to contain high levels of human chorionic gonadotropin (hCG)—a hormone produced by the female placenta during pregnancy. Instead of praising the finding as a divine miracle, FIBA assumed that Cooper had submitted a woman’s urine as his own, without knowing that she was pregnant at the time, so they banned him from playing competitively for two years.
In September of last year, D.J. Cooper announced that he was leaving AS Monaco, despite finding great success with the European basketball club. He cited “family reasons” at the time, but the recent revelation of his “pregnancy” sounds like a more believable reason to quit the club.

Cooper apparently got banned trying to get a spot on the national basketball team of Bosnia. After applying for citizenship in 2014, the American baller was looking to join the Bosnian team as a naturalised player, for which he had to undergo a routine drug test. FIBA confirmed that Cooper was accused of fraud and banned on the spot in June of 2018, which explains his leaving AS Monaco as well.
Slovenian media claims that Cooper submitted his own girlfriend’s urine as his own, with neither of them knowing she was pregnant, but FIBA has refused to comment on the details of this case. It did clarify that Donnell Cooper will be allowed to play again on June 24, 2020.

Saxon is a prolific writer with passion for the unusual. I believe the bizarre world is always exciting so keeping you up to date with such stories is my pleasure
Previous Meat Company to Launch World’s First Hot Dog Flavoured Ice Cream Sandwich
Next Chinese Scientists Use Special Chip to Power Autonomous Bicycle (Watch Video)