See Insect-Only Eatery That Offers Ice Cream Made from Insects 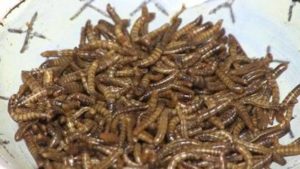 It is called “Insect Experience”. This is eatery in South Africa that offers you only  insect-based delicacies, including ice creams. The eatery is presently in the news for aiming to make bugs palatable.

Food scientist Leah Bessa and her partners believe that bugs have a lot of potentials as food source.
Their South Africa-based company, Gourmet Grubb, produces ice cream made from an insect-based dairy alternative they’ve named EntoMilk. It’s made from Hermetia illucens, the black soldier fly.

And since June, they’ve been operating a pop-up food concept in Cape Town called The Insect Experience, where dishes featuring insects are plated with the same care and precision as any gourmet delicacy.

“We sort of wanted to try and create a viable protein alternative that is sustainable and ethical and could really create quite a positive change going into the future,” Bessa said.

There are more than 1,900 known edible insect species consumed around the world, according to the Food and Agriculture Organization of the United Nations.

Edible insects are incredibly healthy, according to Bessa. They’re high in protein, for one — a quality protein that has the right amino acid profile for human consumption. They’re also high in iron and zinc, high in fiber, and they have a healthy fat profile.

In other words, edible insects have high potential as a sustainable source of food.

“Insects are very underutilized or not really very well understood, so we really wanted to try and highlight their potential. And also their taste, as well, because you know people don’t really know much about them, what they taste like, how they can be used,” Bessa said.

“We try to make it as visually pleasing for everybody to just introduce it. It helps with your mental block,” Barnard told CGTN.

While an unusual ingredient in some parts of the world, eating insects is nothing new.

Approximately 2 billion people globally consume insects, according to the UN Food and Agriculture Organization. They’re primarily consumed in parts of Asia, Africa and Latin America and have always been included in human diets.

But broader interest in entomophagy — the consumption of insects by humans — is growing as the global demand for food strains resources.

And chefs are incorporating them into creative dishes.

So far, mostly locals have popped into the GoodFood food hall in Cape Town’s hip Woodstock suburb to sample the creations at The Insect Experience, touted as South Africa’s first restaurant to focus exclusively on insects.

The pop-up was originally slated to close by the end of August, but Bessa and her partners now hope to keep it open through the middle of 2020, possibly springing up every few months in new locations.

Most of the insects used at The Insect Experience come from South African farms, Bessa said. The only exception are the mopane worms, a southern African delicacy that are sourced from neighboring Zimbabwe.

Saxon is a prolific writer with passion for the unusual. I believe the bizarre world is always exciting so keeping you up to date with such stories is my pleasure
Previous Scam Cite Gives Unimaid Lecturer “World Physics Competition” Award, Nigerians Fall For It
Next Angry Boy Throws Brand New BMW into River Because He Wanted Jaguar as Birthday Gift From Dad (Watch Video)