Home / Uncategorized / Man Arrested For Dumping Dirt On Car. His Girlfriend Was Inside

Man Arrested For Dumping Dirt On Car. His Girlfriend Was Inside 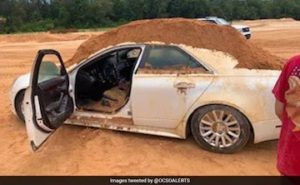 A man in Florida, USA, has been arrested for dumping a mound of dirt on a car that his girlfriend drove to his place of work. Okaloosa County Sheriff’s Office said in a Facebook post last Thursday that Hunter Mills had been charged with felony criminal mischief for the act.
According to police, the 20-year-old had invited his girlfriend to talk near his place of work in Crestview.

“She arrived in a white 2010 Cadillac belonging to someone else. After she refused to answer a question, the defendant used a front-end loader and dumped a bucket full of dirt on the roof of the driver side half of the car,” Okaloosa County Sheriff’s Office said in their Facebook post.
Luckily, Mr Mills’ girlfriend escaped without any injuries. However, Newsweek  reports that as the vehicle’s windows were open, dirt filled into the center console and air vents and caused more than $1,000 worth of damages.

Police also shared pictures of the car with dirt on and inside it, along with a photograph of Hunter Mills.

Their post has collected thousands of shocked reactions, along with a number of ‘shares’.
“Wow, what a dirt bag,” quipped one person in the comments section. “This is a whole new level of petty relationship vengeance,” said another.

Valley News  reports that an attorney for Mr Mills was not listed in jail records related to his arrest.

Saxon is a prolific writer with passion for the unusual. I believe the bizarre world is always exciting so keeping you up to date with such stories is my pleasure
Previous Woman Seeks Divorce From Husband Because He Loves Her Too Much, Does Not Argue With Her, Says She is “Choked By Extreme Love and Affection”
Next Fidel Castro’s Crocodile Attacks Man During Party