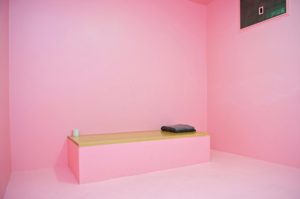 Several Swiss prisons have painted their jail cells in a color called “Cool Down Pink” as a way to curb prisoners’ aggressive behavior and even though the measure was adopted by other European countries in recent years, there are those who find the measure degrading and manipulative.
It’s a known fact that colors have a significant influence on our mood. It is said that red can stimulate our appetite, which is why you’re more likely to see it used in restaurants, as opposed to blue, which apparently suppresses the appetite. Every color is associated with various emotions which as a whole can influence our moods. For example, pink is usually associated with happiness and compassion, but also weakness and femininity. And that’s what makes it so controversial. Psychologists have long argued that it can have a calming effect on people, but using it in the penal system has also been described as humiliating, gender stereotyping and manipulative. 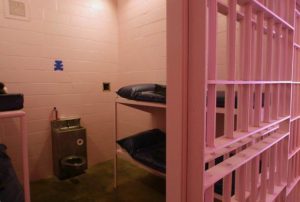 The first to flaunt the idea of using pink in prisons to curb inmate aggression was researcher Alexander Schauss, who in the late 1970s conducted a series of experiments to demonstrate the power of color on human behavior. In one of his controversial studies, he had male subjects look at a bright pink poster with their arms outstretched, and proceeded to demonstrate how easily he could push their arms down. When he repeated the experiment with the color blue, the subjects’ strength allegedly returned.

Naval officers Gene Baker and Ron Miller were some impressed with Schauss’ findings that they painted the holding cells at their naval bases in the same shade of bright pink and later reported a drastic change in prisoners’ behavior. Apparently, they were all considerably less aggressive. The color became known as Baker-Miller Pink and went on to be used by several prison wardens throughout the 1980s.
Baker-Miller Pink was the go-to “anti-aggression pink” until Schauss decided to conduct more color experiments on inmates and this time found that the bright pink didn’t have a calming effect after all. Not only that, but he reported concerns that the color might actually make prisoners more violent. His suspicions were confirmed 30 years later, when psychologist Oliver Genschow conducted rigorous tests to check whether Baker-Miller Pink actually calmed down violent inmates. It turned out that it didn’t.

However, it’s worth pointing out that Baker-Miller Pink is a bright, hot pink, and in 2011 Swiss psychologist Daniela Späth decided to conduct her own experiments with her own shade of pink, a paler, gentler version she named “Cool Down Pink”. It was applied to the cells of 10 prisons throughout Switzerland, and over four years, prison staff reported significantly less aggressive behavior in prisoners who were placed in the pink cells compared to those in regular cells. Späth herself noticed that prisoners were also able to relax quicker in pink cells.
Cool Down Pink is the new Baker-Miller Pink, and it is slowly spreading in prisons outside Switzerland as well. Kremlin-backed news outlet Sputnik suggests the color is also used in German prisons like the ones in Dortmund, Hagen, Kleve and Attendorn, and the color’s creator, Daniela Späth, suggested other applications for it as well, such as decoration in airport security areas, schools and psychiatric hospitals.

But while psychologists and prison staff may be please with Cool Down Pink and its aggression-curbing effect, prisoners themselves are apparently not that happy. One former inmate of a Swiss prison told British newspaper The Telegraph that being held in a cell that looked like “a little girl’s bedroom” was very degrading.

Saxon is a prolific writer with passion for the unusual. I believe the bizarre world is always exciting so keeping you up to date with such stories is my pleasure
Previous Doctors Find Venomous Brown Recluse Spider in Woman’s Ear After She Thought It Was Just Water
Next Man’s 30-Year Headache Allegedly Caused by Worm Stuck in His Brain