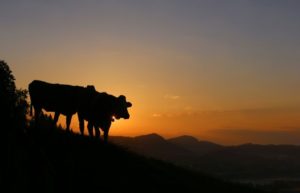 Vienna (AFP) – Austrian police said Monday they are hunting for thieves who stole over a dozen bells from cows grazing in the west of the country.

“Of course people may wonder why someone would steal a cowbell,” Bernhard Gruber, a police spokesman from the Tyrol region, told AFP.

Police are investigating four thefts of a total of 13 cowbells in the Tyrol this month, and say they suspect the thieves in at least three cases are the same.

Police estimated that the stolen bells were worth a total of less than 1,000 euros.

“They don’t have a high material value… but for the farmers themselves it’s more the sentimental value,” Gruber said.

Many breeders take their cattle to graze in mountain pastures in the spring, bringing them back down before winter.

Saxon is a prolific writer with passion for the unusual. I believe the bizarre world is always exciting so keeping you up to date with such stories is my pleasure
Previous Escaped deadly cobra terrorises German town
Next 182 pigs killed in accident while being conveyed to slaughterhouse