Home / Europe / Bullfighter gored in the groin during the Basque culture celebration in Spain, See what happened After (Photos)

Bullfighter gored in the groin during the Basque culture celebration in Spain, See what happened After (Photos) 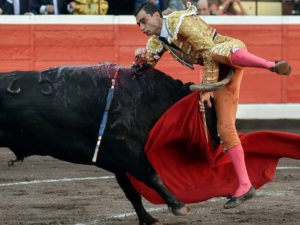 A Spanish bullfighter was gored in the groin during Basque culture celebration Spain which runs for nine days in August.

Gruesome images show the frightening moment Paco Urena was gored in the groin by an angry bull at the Vista Alegre bullring in Bilbao, Basque Country, northern Spain 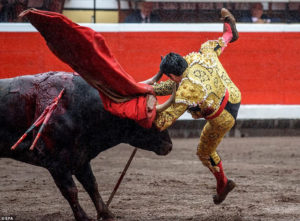 Mr. Paco was tussling with the animal as part of the Semana Grande (Big Week) fair before he was then seen making a pained expression as the bull lunges its horn between his legs. 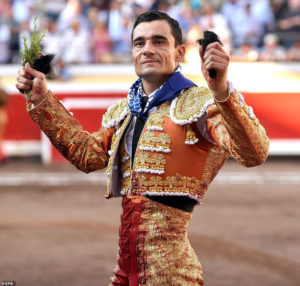 The Spanish bullfighter who appeared not to sustain serious injuries was also pictured flaunting his two bull’s ears trophies.

Saxon is a prolific writer with passion for the unusual. I believe the bizarre world is always exciting so keeping you up to date with such stories is my pleasure
Previous #BBNaija: Khafi replaces Gedoni with a ‘teddy bear’ (Photo)
Next Escaped deadly cobra terrorises German town