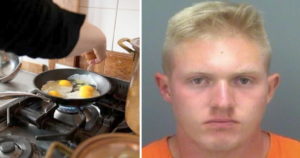 SAFETY HARBOR, Fla. (AP) — Authorities say a burglar broke into a Florida home, cooked himself an early morning meal and told the resident there to “go back to sleep.”

The home’s occupant told investigators he awoke to discover the man cooking and eating sometime after 4 a.m. Tuesday.

Fox 13 in Tampa reported the burglar ran from the house when the resident called 911. Deputies from the Pinellas County Sheriff’s Office tracked down the suspect in a wooded and swampy area behind the home.

An arrest report mentioned that the suspect may have been under the influence of alcohol.

Saxon is a prolific writer with passion for the unusual. I believe the bizarre world is always exciting so keeping you up to date with such stories is my pleasure
Previous Bear Walks Into A Hotel and Takes A Nap in Bathroom (Watch Video)
Next Florida Man Parks His Car In Kitchen To Save It From Hurricane Dorian