Viewers of an exhibition match between two major football clubs last Sunday were outraged to see what looked like a child puffing away on a cigarette in the stands. However, the smoker turned out to be a lot older than he appeared.

During a televised exhibition match between Bursaspor and Fenerbahce, two of Turkey’s biggest football clubs, viewers were treated to some disturbing-looking scenes. As the reporter interviewed someone on the pitch while the players were warming up, the cameras jumped to a couple of young Bursa fans in the stands, one of whom was eagerly puffing on a tobacco cigarettes. Everyone was outraged, and the short clip spread on social media like wildfire. 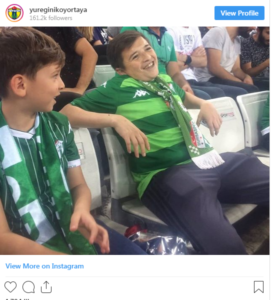 At first glance, the people’s outrage seems justified. A kid surrounded by grownups puffing on a cigarette like a pro isn’t something you expect to see in a civilized country in 2019. Only the kid is apparently much older than everyone thought. I don’t know if it’s the childish hairdo, his eyes, his short stature or all of the above, but he really looks much older than 36, which is how old he truly is, according to Fenerbahce fan club, Yüreğini Koy Ortaya.

There is even a close-up photo of the “kid”, and he does look much older. His face is wrinkly and he has the gut of an adult man, so he’s definitely as young as the boy sitting next to him, which apparently is his son.

The man’s age hasn’t been confirmed yet, but he’s clearly not a minor. Still, he was in breach of Turkish smoking regulations regarding smoking in public, so he’s probably not too eager to come out and set the record straight.

Saxon is a prolific writer with passion for the unusual. I believe the bizarre world is always exciting so keeping you up to date with such stories is my pleasure
Previous Man threatens electricity workers with gun, machete (Watch Video)
Next Heartless Mother Sells Off Twin Babies to Settle Debt, Buys New Smartphone