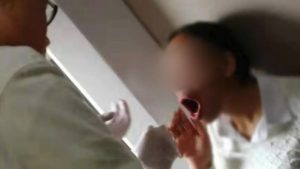 If you’ve ever laughed too loudly and hard before you better read this story then think twice before doing so again next time.

A Chinese woman recently had to have her jaw set back in place by a doctor after she dislocated it by laughing too loudly. I guess laughter really wasn’t the best medicine for her, quite the contrary.

The bizarre incident took place on September 1st, on a high-speed train heading to Guangzhou South Railway Station. Doctor Luo Wensheng, who had boarded the train in Kunming, the capital of south-western Yunnan Province, was commuting to Liwan Hospital – part of Guangzhou Medical University – when he heard an urgent appeal for medical assistance being broadcast through the carriage speakers. He rushed to help and found a female passenger who had her mouth open and was drooling profusely, which indicated that she had suffered a stroke, but he blood pressure was normal. It was only after speaking with eye-witnesses that he learned that the woman had become unable to close her mouth due to laughter.

“She was drooling, so I initially thought she had had a stroke,” Luo Wensheng told Guancha News. “But I took her blood pressure, then asked her some questions, and learned that she had actually dislocated her jaw.”

Unfortunately, Wensheng, who wasn’t an expert in this medical field, was put in the uncomfortable situation of having to fix the poor woman’s face. He told her that he would try to help her, but that there was a high risk that he wouldn’t be able to set her jaw. Still, she wanted him to try. 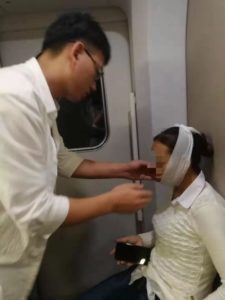 “The patient was quite nervous and her facial muscles were all very tense, so it failed on the first attempt,” the doctor said. “I advised her to go to a hospital instead, but train staff told us it would be another hour. The passenger became very agitated and wanted her jaw set right away, so I agreed to try again.”

This time around, Dr. Luo attempted to set her jaw was the patient was distracted, and he was successful. Once again able to close her mouth, the grateful woman thanked him and said that she had dislocated her jaw once before, as a result of puking during her pregnancy. Apparently, once you dislocate your jaw once, you are likely to do so again, while yawning, laughing or just opening your mouth too much.

Saxon is a prolific writer with passion for the unusual. I believe the bizarre world is always exciting so keeping you up to date with such stories is my pleasure
Previous Heartless Mother Sells Off Twin Babies to Settle Debt, Buys New Smartphone
Next Goalkeeper Gets AK-47 Rifle As Prize For Man Of The Match Performance In Russia