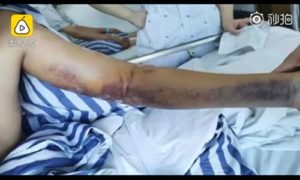 An arm-wrestling match ended in disaster for one of the contenders when he fractured his arm in two places.
The trial of strength, which took place between a college student surnamed Xu and his friend in Changzhou, East China’s Jiangsu Province, ended when Xu heard a clicking sound and found he could not move his hand.
Xu was rushed to a local hospital for an X-ray, where his doctor found his humerus, the long arm bone that connects the shoulder and elbow, had been fractured.
In the video posted online, Xu’s left arm is black and blue.
Li Xiaolong, director of the orthopedics department of the hospital and also Xu’s doctor, told Pear Video that doctors were surprised that Xu had suffered such a break.
“The student is young and we found that his bones are of good quality after we examined him,” Li said. “Such a young person breaking their humerus is incredible for us.”

Saxon is a prolific writer with passion for the unusual. I believe the bizarre world is always exciting so keeping you up to date with such stories is my pleasure
Previous Most Expensive Breastfeeding Pillow in The World Costs N36K
Next Chinese web celebrity pays stars millions to come to his wedding, recoups cost with online sale