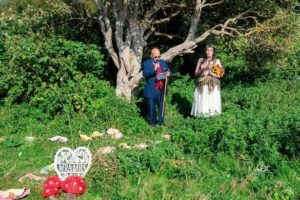 A mum-of-two has ‘tied the knot’ with a tree and now intends to change her surname to reflect the species she ‘married’.

Kate Cunningham’s family and friends looked on as the bizarre wedding ceremony was held in a Merseyside park.

The 34-year-old bride decided to ‘marry’ the elder tree in Litherland’s Rimrose Valley Park as a stunt to raise awareness about a campaign opposing the construction of a new bypass.

The activist, from Melling, told the Liverpool Echo that she had a hen do the night before and now plans to change her name to Kate Rose Elder by deed poll.

She wore an olive green dress, a home made skirt and green pumps for the symbolic ceremony. 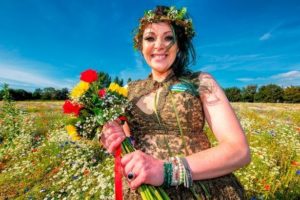 Before the big day, Miss Cunningham told the Echo: “My boyfriend is very supportive of my decision.

“He’s even helped make props for the ceremony.

“My oldest son was initially embarrassed when I told him I was going to do it, but now he has decided to come to the ceremony. It means a lot to him to be there.

“My dad has been very supportive. He’s been out in his van helping to organise everything for the big day.”

She added: “At first it was just an idea. Then we decided that we were going to make it happen.

“It’s a great day for all the local community to come together.

Local residents have been campaigning to block the new three-mile bypass through Rimrose Valley.

Proposed by Highways England, it is intended to ease traffic congestion into the Port of Liverpool.

Miss Cunningham said she had a hen party on Friday night to mark the occasion.

Her stunt was inspired by female activists in Mexico who held similar wedding ceremonies to raise awareness about illegal logging and land clearing.

She said: “The spark for this idea came when it was announced that road was going to be built.

“I’ve been a protester marching in street demonstrations with thousands of other people but it doesn’t attract enough attention from people.

“I want people to engage with the campaign and raise questions about the destruction of our greenspace. There are plenty of local people who aren’t even aware of what is happening.

“This is particularly close to my heart. My mum died of an asthma attack and I suffer from a lung condition called bronchiectasis which means that my own lungs are prone to infection.

“Plans to bulldoze this beautiful place for yet another busy road makes no sense and are an attack on our health.

“There is already too much pollution in our region and we desperately need a solution which addresses this; not one which will make it even worse.”

In July, This Morning fans were left in shock when a woman tearfully ‘married’ her dog after giving up on men.

A woman famously ‘married’ a 300-year-old pirate ghost only to announce a few years later that she has divorced the phantom .

She claims he tried to kill her by giving her sepsis.

Saxon is a prolific writer with passion for the unusual. I believe the bizarre world is always exciting so keeping you up to date with such stories is my pleasure
Previous Male sex dolls are being introduced to adult market – but may be too heavy to handle
Next Indian Man, 32, Poses as 81-Year-Old to Fly to U.S. with Fake Visa