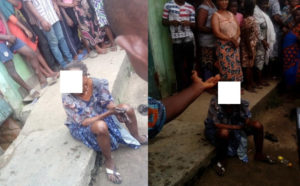 Some residents of Oworonshoki community in Lagos State, took to Facebook to make claims of a bird turning into an old woman today September 21.

Sharing videos and photos to back claims of the incident which reportedly occurred at No. 39 Miyaki Street in Oworonshoki, the Facebook users said the old woman confessed to coming to the Lagos community to attack a pregnant woman.

Here are some of the Facebook posts and the video below; 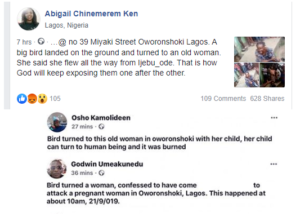 Saxon is a prolific writer with passion for the unusual. I believe the bizarre world is always exciting so keeping you up to date with such stories is my pleasure
Previous Thieves steal $5 million gold toilet from Britain’s Blenheim Palace
Next Family Too Poor to Buy Milk Feeds Baby with 1.5 Liters of Coffee a Day