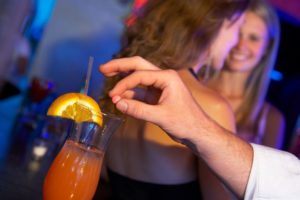 A woman has told how her drink was spiked on a terrifying Tinder date – and she then had to flee her attacker.

The victim now hopes to raise awareness of how easily drink spiking can happen.

The woman, who is in her 20s and from Llandudno, Wales, agreed to go out for dinner with the man she matched with on Tinder after speaking to him for a few days.

She was surprised the man, who had told her he was six years older than her, looked much older in person than the pictures on his profile, but decided to continue with the date

During the dinner, they both had soft drinks with their food, and the woman left her drink on the table while she went to the toilet and also allowed him to go to the bar for her, the Daily Record reports .

She said: “I really wanted to give him a chance and, honestly, it felt too awkward to leave when we had only just met.

“All through the dinner, he sat very close to me. I just tried to slowly edge down the booth and put some distance between us.

“He didn’t really talk much, which was weird. When I wasn’t talking, there was just silence between us.

“It was an awkward date, but my gut didn’t tell me I was in danger. I don’t really drink a lot anyway, plus it was a weekday, so I stuck to the soft drinks.

“I didn’t think twice about him going up to the bar to get my drink, or leaving it on the table with him while I went to the bathroom.

“He seemed a little odd but harmless. There was no point I felt unsafe or at risk, until all of a sudden I was.”

The woman said that, towards the end of the dinner, she began to feel “strange”, so she decided to end the date early and go home.

“All of a sudden, I just felt wrong,” she said. “That’s the best way I can describe it. I said I wasn’t feeling well and he offered to walk me home. I thought he was being nice.

“I suddenly felt so tired, like my eyes weighed a ton. I was fighting to keep them open.

“When we got to my door, I tried to say goodnight and turn away, but he grabbed my wrist and told me to stay and talk longer. I told him I didn’t feel well but he still didn’t let go.

“I started to panic, and I told him to let go of me and tried to pull my wrist from him.

“Eventually, he let go and tried to make a joke about me overreacting. I turned and got inside as fast as I could, but I didn’t make it far.

“I woke up the next morning half undressed, with half of my body on my bed and the other half on the floor.

“I hadn’t taken my makeup off or put my phone on charge. I hadn’t even turned my bedroom light off

“I felt like I had been hit by a truck. My head hurt worse than any hangover I have ever had. My body ached. It felt so sore and heavy.

“I felt so confused, so groggy, but worse than that I felt so vulnerable and embarrassed.

“I wanted to cry, and I didn’t really know what to do, so I got dressed for work and kept thinking: ‘Just get on with it.’

“The whole day, I couldn’t concentrate or shake it. I felt sick to my stomach and everything.

“I considered reporting it but, even though I did nothing wrong, I felt so ashamed. I was so worried about what people would think or say about me.

“I didn’t want to be treated like a victim or called a liar, to have people talking about me. I just wanted to move on.

“I Googled what to do when you’ve been spiked, and even the NHS advice just says it’ll leave your system in 72 hours and only says go to A&E if you’re in immediate danger.

“None of that felt like the right thing, and I didn’t know what else I could do, so I deleted the dating app and I got on with my life.

“Part of me still feels ashamed. I wasn’t brave enough to report it. I just hope he hasn’t done this to someone else.”

There are no official statistics for drink spiking, and many incidents are believed to go unreported because of embarrassment or memory loss.

Date rape drugs like Rohypnol and Gamma Hydroxybutyrate (GHB) are usually odourless, colourless and tasteless, so are hard to detect and leave the body very quickly.

The NHS says that most date rape drugs take effect within 30 minutes, but symptoms can last for several hours.

The NHS says: “Drink spiking may be done with the intent of stealing from the victim, assaulting the victim, or as a prank.

“Whatever the reason, drink spiking is illegal and can result in a maximum of 10 years in prison for anyone who’s found guilty.

“If an assault, rape or robbery has also taken place, the sentence will be even higher.”

Saxon is a prolific writer with passion for the unusual. I believe the bizarre world is always exciting so keeping you up to date with such stories is my pleasure
Previous Family Too Poor to Buy Milk Feeds Baby with 1.5 Liters of Coffee a Day
Next Man commits suicide over loss of Bet9ja ticket