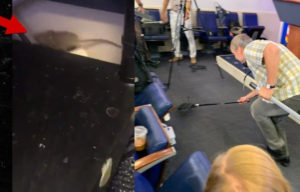 A video making rounds online captured the moment White House reporters ran for cover after a mouse fell from the ceiling of the presidential villa’s press booth.

The rodent which fell on the lap of NBC News White House correspondent Peter Alexander at about 10:45 a.m on Tuesday october 1, eventually sought refuge amid a tangle of wires behind a shelf.

Confirming the short drama that ensued, some of the White House correspondents including Reuters’ Steve Holland tweeted photos of journalists scrambling in the press room as they searched for the mouse as it ran around the booth.

NEWS: A mouse literally fell out of the cieling at the White House onto @PeterAlexander’s lap. pic.twitter.com/xszUSvejfL

The most excitement in the White House briefing room in months. Reporters attempt to capture a baby mouse that fell on ⁦@PeterAlexander⁩ lap moments ago pic.twitter.com/6zWRZfTAaq

Saxon is a prolific writer with passion for the unusual. I believe the bizarre world is always exciting so keeping you up to date with such stories is my pleasure
Previous Woman shot by boyfriend didn’t realize it for more than a month
Next Daredevil scientist screams in pain after letting six-foot python bite him (Watch Unbelievable Video)