Man, 27, caught digging up his father’s body after 14-years to retrieve his leather shoes (See Photo) 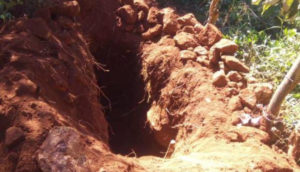 A Kenyan man was caught exhuming his father’s body to retrieve his leather shoes.

27-year-old Patrick Mwangi Katonye was caught by members of the public, disinterring the body at around 8 am on Wednesday, October 2, in Maseno Village.

The photo above shows the disturbed grave of his late father Johnson Ndonye in Subukia, Nakuru County.

According to Nakuru Police Commander Stephen Matu, the suspect wanted to retrieve a pair of leather shoes his late father Johnson Ndonye was buried with back in 2005. The police commander said the man claimed he wanted to sell the shoes.

“The suspect told the police that he wanted to sell the shoes. He waited for members of his family to leave the home before exhuming the body but the shoe was rotten,” said Matu.

Police arrested Katonye and ordered him to be taken for psychiatric tests before being presented in court where he will be charged for disturbing the dead.

“It is wrong for anybody to exhume the dead. Such can only be done if permission is granted by a court of law. Investigations have therefore commenced after which the suspect will be arraigned,” added the police boss.

Matu said the suspect’s family requested the police to allow them to conduct prayers before reburying the body, as it is a taboo to exhume the dead.

“Police are liaising with the family and the church to rebury the body. The family requested us to allow them time to conduct some prayers and cleansing,” he said.

Saxon is a prolific writer with passion for the unusual. I believe the bizarre world is always exciting so keeping you up to date with such stories is my pleasure
Previous UK Couple Train Trees to Grow as Furniture On Farm (Photos)
Next Man accused of shoplifting but it turns out the bulge in his trousers was just his 10 inch penis