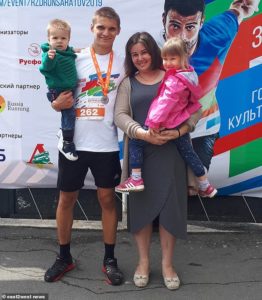 A ‘jealous’ husband killed himself and his two children when he jumped from a ninth floor balcony moments after his wife filed for divorce.

Before the tragedy in Saratov, Russia, the father-of-three had sent his wife Irina, 29, a picture of the three of them on the balcony.

The woman, a psychologist, rushed home in a taxi but arrived at the apartment building too late to prevent the horror.

Paramedics were called to the scene and they tried desperately to save the lives of the two children, who sadly both passed away.

Irina was described as being in ‘deep shock’ after the death of her family.

The man, who worked for Russian Railways, was described as ‘jealous’ over his wife’s suspected new relationship.

In a note he was said to have written and left at their home, he said: ‘The blame is on my wife’s shoulders.’

Saxon is a prolific writer with passion for the unusual. I believe the bizarre world is always exciting so keeping you up to date with such stories is my pleasure
Previous Man accused of shoplifting but it turns out the bulge in his trousers was just his 10 inch penis
Next Police Haunt for Men Who Sodomized their friend, Chopped off his p3nis after Drinking Spree