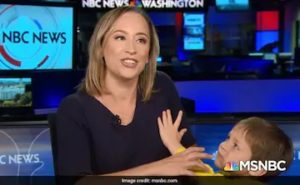 On Wednesday morning, MSNBC national security correspondent Courtney Kube was in the middle of her analysis on a live broadcast when she was interrupted by her son. She was discussing the Turkish air strikes in northern Syria when her four-year-old son, Ryan, snuck up behind her and demanded her attention.
“Excuse me, my kids are here.” Ms Kube said, smiling during the segment. “Live television!”

She took the interruption in her stride and went on to talk about the situation in Syria as the screen cut to a map. Her video, shared by MSNBC on Twitter, has garnered over 2.3 million views.
“Sometimes unexpected breaking news happens while you’re reporting breaking news,” wrote MSNBC, adding the hashtag #workingmoms.

Ms Kube, 41, left many impressed with her multi-tasking skills.

Like a boss! Also, great teamwork on the graphic. Kids are the best.

The incident also reminded many of BBC Dad Robert Kelly who, in 2017, was interrupted by his own kids in the middle of an interview, giving the Internet one of its favourite viral moments.

That yellow shirt reminds me of someone else’s TV moment.

Ms Kube later told Today that she was happy Ryan didn’t start crying. “As soon as I realized he was standing next to me, for a second your heart kind of stops,” she said. “I almost picked him up and put him on my lap, but I was afraid he would lean back against mic.

“I was so glad he didn’t start crying. He was smiling and happy. It could’ve been worse!”

Saxon is a prolific writer with passion for the unusual. I believe the bizarre world is always exciting so keeping you up to date with such stories is my pleasure
Previous See Why This Town Was Told Not To Wash Clothes For 5 Days
Next Ninja History Student Gets Top Marks for Writing Essay in Invisible Ink