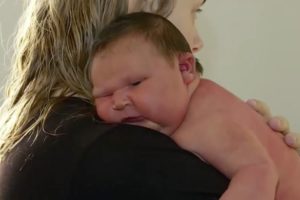 A mum has given birth to a ‘mini sumo wrestler’ baby girl who weighs a staggering 13lb.

Remi Frances Millar was welcomed into the world by her parents Emma and Daniel Millar at Wollongong Hospital, south of Sydney, on Monday via emergency caesarean, around two weeks early.

Emma, 27, has gestational diabetes and was told by doctors she would be giving birth to a larger than average baby but was stunned at the whopping weight for her newborn. 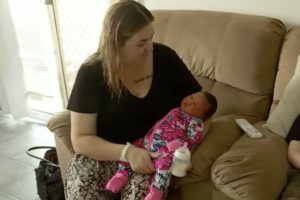 Remi, who was born healthy, isn’t the first large baby born into the Millar family as the couple’s two-year-old daughter Willow was born weighing a whopping 12.2lb.

“Our other children just adore Remi, who is really healthy and content and just thriving.”

When Emma was just 35 weeks, an ultrasound revealed she weighed  8.81lb.

Despite this Mr and Ms Millar didn’t expect her to grow any more.

While an average Australian baby weighs just 7.27lb, Ms Millar gave birth to Remi at 12.96lb when she was 38 weeks’ and two days pregnant. 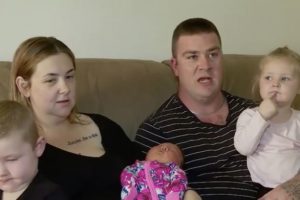 Remi is thought to be the heaviest newborn at hospital.

Emma said: “When I’ve walked around with her there’s always a crowd of people – midwives, other new parents and visitors – around her, asking about her size because she’s so much bigger than all the other newborns.

Just 40 per cent of Australian newborns weigh more than 7.71lb.

Remi  has become one of the  1.2 percent of newborns who weighing more than 9.92

Saxon is a prolific writer with passion for the unusual. I believe the bizarre world is always exciting so keeping you up to date with such stories is my pleasure
Previous Prison officer jailed for having sex with inmate in a cleaning closet
Next See Restaurant Built Inside a Coffin! Can you accept even free lunch here? (Photos)