A man kept six people in the cellar of a remote farm for years ‘waiting for the end of time’. The people kept there include five adult children and their sick father. They were only discovered when the eldest boy – now a man – stumbled into a nearby cafe in the town of Ruinerwold, in Drenthe, Netherlands.

He told the owner he had not been outside for nine years. Police then found a man, 58, who had been keeping five suspected adult children – aged 16 to 25 – and their father in the isolated farmhouse without anyone knowing they existed.
The oldest sibling is understood to have entered the cafe several times but the last time he entered, on Sunday, he told the owner he wanted to ‘end’ the way he and his siblings were living. 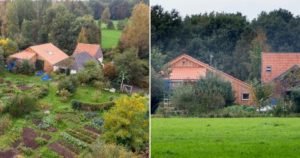 Some of the children have never had any contact with neighbours and were convinced they were the only humans on earth, according to local media.

Cafe owner Chris Westerbeek told Dutch broadcaster RTV Drenthe: ‘He was very confused. ‘He ordered five beers and drank them. Then I had a chat with him and he told me he had run away and needed help. ‘Then we called the police.’ The man was described as having long hair and a beard and claimed to have not been outside for almost a decade.

Chris said: ‘He said he had brothers and sisters who lived in the farm. ‘He said he was the oldest and wanted to end the way they were living.’ Police went to the farmhouse and found a secret flight of stairs in the sitting room hidden behind a cupboard which led to the family’s hiding place.

The older man – believed to be the siblings’ father – was in bed, having had a stroke several years ago, police said.
It is not known how long the family had been living in the cellar or what happened to the children’s mother.

The children had no contact with the outside world and lived completely self-sufficiently with their own vegetable garden and a goat. A neighbour of the farm told RTV Drenthe he thought the man, who had boarded up all the farm windows, lived there alone. He told local reporters: ‘I am shaking on my legs.’ Police confirmed finding the family and opened an investigation last night which they said is ongoing.

The area around the farm is closed. A police spokesperson said: ‘First and foremost, we see it as our task to offer good care and support to the family.’ According to people living nearby the farm has been surrounded by high fences for several years. It is owned by a man who lives in the town, who believed he was renting to a single man and said he ‘knew nothing’ of the tenant or any children. The town of Ruinerwold has a population of just under 4,000 people.

Five siblings aged between 18 and 25 were found along with their sick father in a secret room on the farm near Ruinerwold, a village in the northern province of Drenthe. All six people rescued are now receiving medical treatment, Dutch police have said. A man, 58, who was arrested following the discovery of the family on Tuesday, is not the father of the children, local Mayor Roger de Groot said.

Police said the people may have been hidden away on the property for nine years.

In a statement, they said: ‘We found six people living in a small space in the house which could be locked, not a cellar. ‘It is unclear if they resided there voluntarily. ‘They say they are a family, a father and five children.’ The Dutch newspaper Algemeen Dagblad daily identified the man who has been arrested as Joseph B, an Austrian carpenter.

Police confirmed they had arrested a man who was renting the farm but would not comment on his identity. Officials have not confirmed reports that the family may have held ‘end of days’ apocalyptic beliefs.

Saxon is a prolific writer with passion for the unusual. I believe the bizarre world is always exciting so keeping you up to date with such stories is my pleasure
Previous Woman pays $20,000 in surgery for third breast, the reason will shock you!
Next 36-year-old world’s most fertile mother who gave birth to 44 children has finally been stopped from having more kids