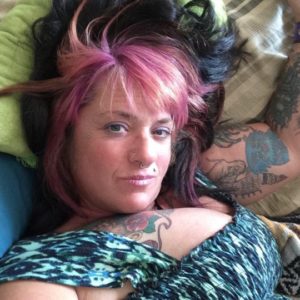 Police in Missouri have arrested a woman who admitted that she nearly killed her boyfriend when she forced him to perform oral sex on her by sitting on his face.

Amy Nicole Parrino, 44, pushed her then-boyfriend onto the ground, sat on him and shouted ‘eat my pussy’, but he could not breathe, last December.

In the run-up to the incident she had run around their home in Boone County, Missouri, while naked, striking him with a belt, brass plate and mobile phone as well as punching him up to 25 times.

He said that he felt ‘sick to my stomach’ and told his girlfriend, an assistant embalmer at a mortuary, to leave him alone. He told police that she had a history of violence and that it had gradually got worse.

He said that he feared for his safety all the time because he did not know what Parrino was going to do next. He said she ‘gets very violent very quickly’.

When police arrived he told them that a cut on his nose was as a result of her sitting on his face.

They saw a three to four inch cut on his left arm and another on his right arm while red chest marks were as a result of being hit by a belt.

Parrino was sentenced to time served as she has been at the Boone County Jail since her arrest in December last year.

A charge of sexual abuse was dropped.

Saxon is a prolific writer with passion for the unusual. I believe the bizarre world is always exciting so keeping you up to date with such stories is my pleasure
Previous 36-year-old world’s most fertile mother who gave birth to 44 children has finally been stopped from having more kids
Next Terrifying footage shows 70mph car chase that killed innocent mum-of-five