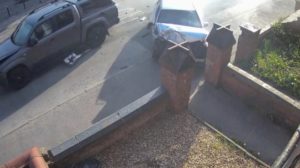 Lewis Fisher, 21, was seen ‘laughing’ and looked like he was ‘relishing the pursuit’ as Joseph Pownall, 27, tore after him ‘intent on revenge’. It stemmed from an earlier incident when one of Fisher’s friends smashed one of the windows of Pownall’s Volkswagen Amarok while it was parked outside a pub in Wigan on April 20.

Footage shows the pair racing through built-up areas at more than double the 30mph speed limit before veering onto the wrong side of the road where Fisher’s Mercedes smashed head-on into a VW Polo driven by 34-year-old Joanne Bailey-Collinge. 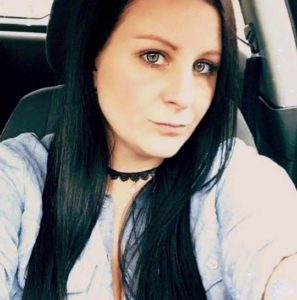 She suffered catastrophic injuries and died hours later. Fisher and Pownall were convicted of causing her death by dangerous driving and jailed for 11 and 12 years respectively at Manchester Crown Court.

The court heard Mrs Bailey-Collinge and her family were on their way to a barbecue at a neighbour’s house.

In a victim impact statement read to the court, Mr Collinge said: ‘Having seen how Joanne was, I knew she was dying and I couldn’t do anything at all.’ Judge Richard Mansell QC told the defendants: ‘

By your senseless act of aggression, you have brought unimaginable tragedy to bear on this family.

‘A 34-year-old mother-of-five has been killed, her husband has been widowed, their two young girls and three other children of Joanne are now left to grow up without their mother.’

Paul Treble, defending Fisher, said his client was ‘frightened’ and was trying to get away from his pursuer.

He said Fisher, who suffered a broken leg in the crash, had displayed ‘genuine regret and remorse’ for what happened.

Nigel Edwards QC, defending Pownall, said his client has similarly expressed his ‘deep regret’ for his actions, and said he knew Mrs Bailey-Collinge ‘through a friend’.

Mr Collinge was not in court for the sentencing hearing, but released a statement through his lawyers afterwards paying tribute to the ‘love of my life’.

‘The past few days have been some of the hardest in my life,’ it said. ‘We all miss Joanne so much and it has been very difficult reliving the incident and everything that happened. ‘She was the love of my life and such a great mum. We just can’t imagine our lives without her.

‘The people responsible for Joanne’s death have left us with our own life sentence and my daughters now have to grow up without their mum.

‘While we know nothing will ever bring her back, we needed these answers and hope that lessons are learned from this incident. ‘Motorists need to remember that the safety of themselves, other drivers and pedestrians should always be a key concern when they are on the road.

‘I wouldn’t wish what we are going through on any other family, and it is vital that the issues seen in this crash are never repeated in future.’

Saxon is a prolific writer with passion for the unusual. I believe the bizarre world is always exciting so keeping you up to date with such stories is my pleasure
Previous Police Arrest woman for almost suffocating boyfriend by sitting on his face for oral sex
Next Man cuts off penis of wife’s rapist, faces longer time in prison than attacker