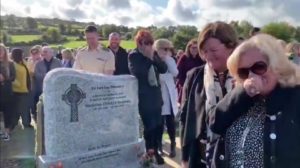 It was a final prank he planned for before he passed on. He suffered long illness so he had enough time to plan a quick one for guests at his funeral.

This is the moment that mourners’ tears turned into laughter when they heard a voice from not quite beyond the grave.

Shay Bradley was being buried in Kilmanagh, Leinster Ireland, when there was a sudden burst of noises coming from his coffin.
Family and friend gathered for the Irish Defence Force veteran’s funeral on Saturday burst out in hysterics as they heard his voice. 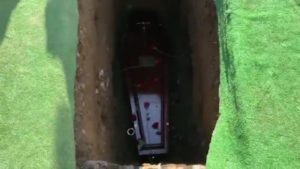 He could be heard shouting ‘Hello, hello. Let me out.’
There was also the sound of knocking on the wooden coffin as he continued: ‘Where the f**k am I? Let me out, let me out. It’s f**king dark in here. Is that the priest I can hear. This is Shay I’m in the box. No in f**king front of you. I’m dead.’ 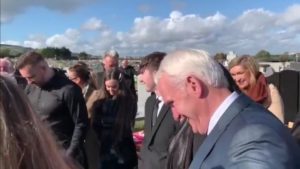 Shay died on October 8 but having suffered a long illness he managed to plan one final prank for guests at his funeral.
The video was shared by the Irish Defence Force veterans’ news service who said: ‘It is with great sadness that I was informed of the passing of our Military Brother and Veteran Colleague Shay Bradley.
‘On behalf of the members of the IDFVA I extend our sincerest condolences and prayers to Anne and family at this sad time. May Shay Rest in Peace.’
They added: ‘Was asked a question the other day, it was what’s the difference between military humour and civilian humour it’s simple it’s black. This video should say it all. This is the funeral of Shay Bradley on the 12 of October 2019 and it says it all……’
Shay’s daughter said the message was recorded before his death and broadcast through a speaker on the ground.
She said: ‘He would love to know how many people he made laugh!!! He was an amazing character.’

Saxon is a prolific writer with passion for the unusual. I believe the bizarre world is always exciting so keeping you up to date with such stories is my pleasure
Previous Man who filmed himself raping girl, 5, may never be released from prison
Next WATCH: ‘Baby, I love you’: ‘Fearless’ woman jumps zoo fence to approach lion