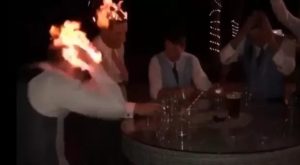 With flames rising from their hair, a viral video has shown how wedding guests put their lives at risk in a bizarre drinking game.
The ‘hooray Henrys’ were among six who took turns pouring the liqueur Sambuca over their heads.

One set himself alight and rubbed his blazing head against that of his neighbour, who did the same – spreading flames around the circle of drinkers as they all downed shots.

Footage of the game was first shared among bankers in the city, where some of those in the video are thought to work.

It then began circulating widely on messaging service WhatsApp, prompting warnings it could lead to severe burns.

The clip shows the guests, wearing blue waistcoats, in a courtyard with music in the background.

As one flails around in apparent panic, the others urge him to set light to another friend’s hair before putting his own out.

“Bobby, hurry up. You’ve got to light him first, light him,” one shouts.
Another toasts ‘the Queen’ before downing his drink. Some use water to douse the flames.

“See, Joe did it very smoothly there,” one of the men says. Sambuca, made from aniseed, is often set alight then drunk, but the prank takes this to a new level.

Drinkaware chief executive Elaine Hindal said: “Drinking games can be seriously dangerous”. A source told The Sun: “Drinkers playing this could easily be engulfed with flames and suffer life-changing injuries”.

Saxon is a prolific writer with passion for the unusual. I believe the bizarre world is always exciting so keeping you up to date with such stories is my pleasure
Previous Man walked over 500km to meet ‘teen’ who turned out to be undercover cop
Next Study says playing hip-hop music to cheese makes it taste better (Watch Video)