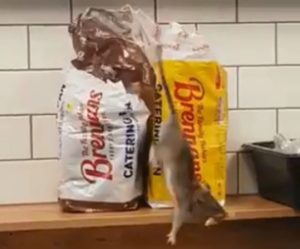 Disturbing footage of a large rat climbing out of a bag of bread ata petrol station in Ireland has left the internet green at the gills.

A video of the giant rodent making its escape surfaced on social media this week.

The clip shows two seemingly ordinary loaves of bread resting on a café counter top alongside a few menus.

Seconds letter one of the loaves – a bag of Brennans brown bread, no less – begins to shake before the rat comes into view.

Emerging from the bread bag, the rodent makes its way across the café’s plastic cup lids before disappearing from view behind the oven.

By the time the clip ends, the hairy intruder is in the area of the café where food is regularly prepared.

The unsettling clip was posted onto Twitter by Tony Groves, alongside the tongue-in-cheek caption: “Ireland’s ultimate breakfast roll. Only €4.”

It was allegedly filmed at Applegreen Service Station in Ballyfermot, Dublin.

Though the staff and owners of the petrol station have been approached for comment, they have so far refused to respond to requests.

Footage has since been posted online appearing to show the Applegreen Service Station closed for business.

At this point it’s unclear as to whether the closure is connected with the posting of the footage online.