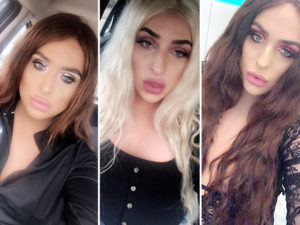 Transphobia refers to a range of negative attitudes, feelings or actions toward transgender or transsexual people, or toward transsexuality. It includes fear, aversion, hatred, violence, anger, or discomfort felt or expressed towards people who do not conform to society’s gender expectation.

Ria Cooper, who became the UK’s youngest transgender person aged 15 before later transitioning back to male age 18, and then to female again later, has accused the photographer of ‘transphobic behaviour’. Cooper said the incident could prevent a future career in the modelling industry.

According to claims reported by the Hull Daily Mail, after posting pictures on social media of a new glamour portfolio, a man reached out to Cooper. He claimed that he could advance her modelling career, and offered her money to have sex with him on camera.

When the man discovered that Ria had male sexual organs, he broke off contact, saying he would not work with her because she still had “a c**k”.

In a private message, the man reportedly said: “Why don’t you send one of yours, my friend just told me — sorry Playboy won’t accept that.”

Speaking to the local newspaper, Ria said: “I am reporting this as a hate crime. It’s like calling someone who is black the ‘N’ word. It doesn’t matter if I have c*** or not. The pictures should be judged as they are. It says on my social media profile that I am a ladyboy, I didn’t ever say that I wasn’t and I thought he knew.”

Saxon is a prolific writer with passion for the unusual. I believe the bizarre world is always exciting so keeping you up to date with such stories is my pleasure
Previous NYC Woman Pays Off $102K In Student Loans, Celebrates With Funeral
Next Giant rat filmed climbing out of bag of bread at petrol station cafe (Watch Video)