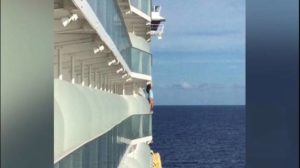 It might be the ultimate selfie, but it just got a woman banned from a cruise ship for life.

The woman took the picture as she stood on top of the railing of her room’s balcony. It happened during her trip on Royal Caribbean’s Allure of the Seas this week as it was headed for Haiti.

A fellow passenger snapped a picture of her taking the selfie thinking she was possibly going to jump and alerted the crew.

The woman was identified and later removed from the ship when it reached Jamaica.

Royal Caribbean in a statement said it does not permit such reckless and dangerous actions for guests’ own safety.

As a result, the cruise line said the woman and her companion are banned for life from any of its future trips.

Saxon is a prolific writer with passion for the unusual. I believe the bizarre world is always exciting so keeping you up to date with such stories is my pleasure
Previous Montgomery County deputy shoots self after hourslong standoff in Spring, authorities say
Next See Chinese Reading Technique that Allegedly Helps Students Memorize 100,000 Words in Five Minutes, It is Called “Quantum Reading” (Watch Video)