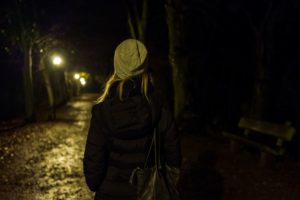 A man who became worried over his girlfriend’s habit to walk home alone in the dark devised a well-intentioned but ultimately terrible plan to show her how dangerous it can be.

Taking to Reddit , he explains that she commutes to and from work but refuses to get a bus or taxi from the nearest train station to save money, despite his kind offers to pay.

When he insists on picking her up, she refuses to tell him where she is and he’s become increasingly worried for her safety.

She calls every night on her hour-long walk back to say something is scaring her, from a rustle in the bushes to nobody else being around, but when the boyfriend offers to pick her up, she says it’s not a big deal.

With the daily event ‘getting in the way of his routine’, the 20-year-old man decided to try and teach her a lesson about the dangers of the world. You can see where this is going.

“So the other night, when she was near home, I waited around the corner at the end of our street,” he said.

“When she came around, I jumped out to scare her. She screamed and dropped her phone.

“When she realised it was me, she got super p***ed off and said I was an a**hole.

“I told her that I was trying to make her see what could happen if she doesn’t get transport home, and she was still really angry.

“Everyone she has told thinks I’m the asshole, but I really think she needed a reality check.”

Unfortunately for the man who used his girlfriend’s own fears against her, scores of strangers on the internet confirmed that her evaluation of the situation was spot on.

“Here’s the kicker though – you’re an asshole for doing it because you know she’s already worried about it.”

Another replied: “Like, as women it is one of our worst nightmares to be somewhere alone in the dark and be grabbed, kidnapped, or assaulted by a stranger, which is probably exactly what his girlfriend thought was happening when he jumped out at her.

“Not to mention he could have caused her a heart attack, for real.”

A third suggested his girlfriend might have learned something after all: “The main lesson she’s going to take away from this is that her boyfriend is an inconsiderate a**hole.”

Saxon is a prolific writer with passion for the unusual. I believe the bizarre world is always exciting so keeping you up to date with such stories is my pleasure
Previous Angry mum takes daughter to ‘court’ after she breaks her bed having sex
Next Fifth Pastor Spotted Using Woman With Bulgy Stunted Arm To Do Fake Miracle (See All Videos)