Woman wears hidden camera in bra to see how often people stare at her br3asts! See shocking footage she captured 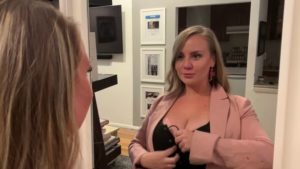 A woman walked the streets of New York with a camera hidden in her bra to see how many people stared at her chest – and says she was completely shocked by the footage.

Footage gathered by Whitney Zelig, 29, catches a huge number of people taking a look, including men, women and even a dog and some famous faces.

But her social experiment had nothing to do with shaming people, and instead she’s done it to raise awareness of a subject she’s very passionate about – breast cancer.

She hopes that highlighting how many people look at other women’s boobs will remind women around the world to think about their own and check.

Speaking to Mirror Online, she said: “It was very vulnerable at first for me, but it was worth it.

“I didn’t notice until we went back and looked at the video, I was just looking straight ahead.

“I was really suprised. I didn’t expect the women to look too, but to be fair everyone loves boobs. I would look too.

“I’m happy I did it because of the positive feedback.

“It was kind of funny, I don’t notice it at any other time. 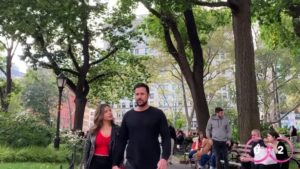 “I mean, I thought it was hilarious. Humour is one of my favourite things and if we can use humour to raise awareness I’m all for it.

“If one woman is inspired to check herself or get a mammogram from this video I will be happy.

“I’m doing it for a bigger cause. This is bigger than the video or me, this is about our mums, grandmothers, children, sisters and friends.”

Whitney, who works in PR, created the video with her brother Chris and their best friend CJ Koegel. 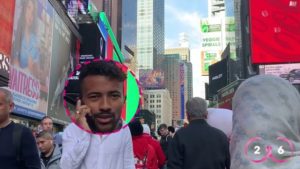 The two men did a similar video in 2014 to raise awareness of prostate cancer and it ended up going viral, so wanted to repeat it with breast cancer.

Whitney and Chris’s mum has had breast cancer, overcoming it twice and she’s just had the all clear from her 10 year check up.

Whitney said: “She’s a wonderful woman. It’s a cause very dear to our hearts.

“She was so inspired afterwards that she decided to further her studies and became an oncology nurse.”

The original woman who was due to be the actress dropped out so Whitney offered to step in as she was so keen to raise awareness.

“I volunteered not really knowing what I was getting into. I’m happy I did because of all the positive feedback.

“It’s not about me it’s about raising awareness and early detection.

“If my mum didn’t check herself she wouldn’t be here.”

The video has already been viewed more than 180,000 times and attracted a lot of attention on social media.

Whitney said: “The reaction has been positive. A lot of people reached out with similar stories about cancer.”

Saxon is a prolific writer with passion for the unusual. I believe the bizarre world is always exciting so keeping you up to date with such stories is my pleasure
Previous See Chinese Reading Technique that Allegedly Helps Students Memorize 100,000 Words in Five Minutes, It is Called “Quantum Reading” (Watch Video)
Next Angry mum takes daughter to ‘court’ after she breaks her bed having sex