The Alien of Ariake Sea! Japan’s Most Delicious Creepy Fish

If you’re a tourist in Japan don’t leave without checking out this terrifying but exciting delicacy.
The mud flats of Japan’s Ariake Sea are home to a creature that is reportedly as delicious as it is disgusting-looking. Introducing the “Warasubo”, an eel-like fish that for obvious reasons is known as the “Alien of Ariake Sea”. 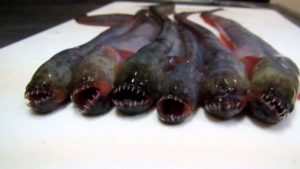 If you’re familiar with H.R. Giger’s Xenomorph (the extraterrestrial creature featured in the ‘Alien’ movies), more specifically its iconic “inner mouth”, one look at the warasubo fish is enough to explain its comparison to the fictional alien. It literally looks like the piston-like appendage that Giger’s ferocious predator uses to pierce its victim’s bodies and even metal. The warasubo is a terrifying-looking thing, especially in dried form, which only makes its use as an ingredient for ramen and other Japanese foods that much stranger.
The green eel goby, aka “warasubo” can only be found in Japan in the Ariake Sea, a large bay in Kyushu, although it can be found in other parts of Asia as well. However, it’s in towns and cities around the Ariake Sea that the Alien-like creature can be enjoyed as a scary-looking delicacy. 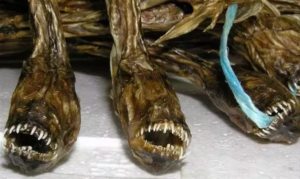 Nearly blind, with translucent skin and featuring small but pointy teeth, the warasubo can be consumed either grilled or dried, whole or in powdered form, as the main ingredient of a hearty soup, or as extra flavoring in a cup of hot sake. It’s apparently a very flavorsome treat that gets tastier the more you chew on it.
While the warasubo may not look like the most delicious thing in the world, regional governments around the Ariake Sea have actually employed the Alien-like creature to boost tourism in the area, even creating a short promotional film that depicts the scary-looking eel as a mysterious creature.

The terrifying eel is being sold under the WRSB brand, an acronym of ‘warasubo’, which took off after the above mentioned promotional campaign.

Saxon is a prolific writer with passion for the unusual. I believe the bizarre world is always exciting so keeping you up to date with such stories is my pleasure
Previous Most Expensive Women’s Sleepwear in the World Costs N1million
Next Girl Suffering from “Sleeping Beauty” Syndrome Can Fall Into Deep Slumber for Up to Two Months at a Time, Mother Appeals for Assistance