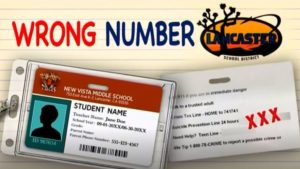 A California public school district apologized Tuesday after a sex hotline number was printed on identification cards issued to middle school students, according to reports.

“Late yesterday we were made aware that the middle school student ID cards have the wrong phone number listed for the Suicide Hotline. The phone numbers have two digits transposed and this is a mistake. The number listed on the card is actually a sex line,” the district said in a statement.

“The middle school administrators will be collecting all student IDs today and we will be printing new student IDs and distributing them to our students. We are very sorry for this error and we are working hard to correct it.”

Saxon is a prolific writer with passion for the unusual. I believe the bizarre world is always exciting so keeping you up to date with such stories is my pleasure
Previous Wedding photo booth captures guest ‘cheating on her date with another man’
Next Watch This Guy Accidentally Blow Up His Entire Yard While Trying To Kill Some Bugs